Let me start by saying that I did not get a Sport Kilt (from http://sportkilt.com/) for running and I have not tried running in it. It doesn’t strike me as something I would necessarily want to run in as it is fairly heavy. Comfort-wise, ignoring the weight, I am sure it would be reasonable for running but I would also worry that the length and motion of running could cause some annoyance with the kilt hitting the back of my knees.

This past weekend, as outlined in my last blog post, I ran as part of a team in the River to Sea Relay. I had received my Sport Kilt the week before and this was to be my first outing in it.

I had decided it would be perfect for the day, despite the fact it wasn’t going to be as hot as it could have been. One of the major benefits was going to be that it could act as a cover to change my running clothes under between legs (and it was ideal for that).

The Sport Kilt wraps around your waist and fastens with velcro. From their website: We use a special 8oz yarn-dyed poly/viscose material that is machine washable, holds a pleat well, has a nice swing and drape, is non-itchy and great for sports in all of our tartan/plaid kilts.

I can confirm that it does hold the pleats well (I got the optional “sew-down” pleats which help them hold better, and I also agree that it is not at all itchy and generally feels great. 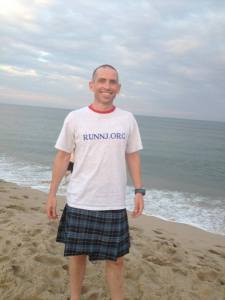 It was so great I just ordered another one. My plan is to wear these on hot days instead of shorts. Perfect.

As I said before though, I can’t see me running in them, but I should never say never. It may be ideal for cooler weather and less competitive runs so perhaps I will give it a try sometime. I would imagine in the heat with the addition of sweat (I sweat a lot), the already (comparatively) heavy material would just become burdensome.

I did meet someone at a race recently who was wearing a Sport Kilt and he seemed to enjoy running in it, so  it clearly works for some.

During the relay I spoke to some guys on another team who wondered if I was running in the kilt. I told them that no, I wasn’t, but I would be running in a women’s running skirt. They were intrigued so I talked to them about my reasoning. They seemed genuinely interested and seemed to suggest they might give it a try (perhaps for next year’s River to Sea, so not necessarily as a general piece of running clothing). They saw me again at the start of my first leg and asked to take a picture with me – I had no problem with that – they commented that it was shorter than they thought it would be.

As I now own a couple of running skirts from http://runningskirts.com/ I had started to wonder about cutting out the underwear portion to substitute with my own. While they were reasonably okay I thought they were a little tight in places. So, I took one and cut out the briefs. After the first run in these combined with a pair of Icebreaker Anatomica briefs I decided to do the same with all pairs (I have since discovered that runningskirts.com has some with nothing underneath – they call them triathlon skirts – I got the others on sale so I don’t feel too bad that I ended up cutting them up like this instead of buying the ones with nothing under). I think this will make the skirts much more flexible, allowing me to choose what is suitable underneath depending on a variety of factors – perhaps there will be a time I may choose to wear compression shorts underneath. 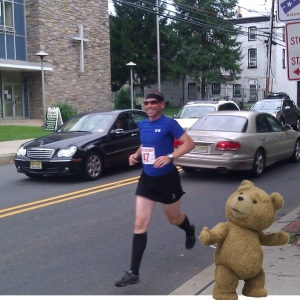 Early on in “The Beast” (before the hills) – this little guy followed us around a bit; he was a good pacer.

Please note that I purchased the Sport Kilt myself and have received nothing at all from sportkilt.com or any other party for writing this review. Similarly I have no association with runningskirts.com

As of August 16th I have decided to continue my thoughts on running in a skirt to a blog specific to that topic. The new blog can be found here (skirtedrunningman).