410 miles on the Merrell Trail Glove 2

I decided it was time to get a new pair of the Merrell Trail Glove 2. Partly due to the 20% off at REI last week, but partly because I have quite a few miles on the ones I’ve had since May (over 410 miles – love the fact that with Strava you can keep track of which shoes you wore on each run otherwise I wouldn’t have a clue), and I thought it would be a good idea to have a backup pair for the marathon (only just over 4 weeks to go).

It wasn’t until I looked at the new ones side by side with the old that I realized how much wear there was (the color is mainly from my last long run along the canal towpath). 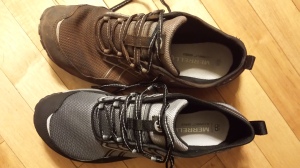 I’m still going to use the old ones as I don’t think I’ll abandon them until they get much worse, but as of right now I’m not sure which ones to use in Philadelphia. I think if I do my final long run on the new ones that will help decide.

This weekend I will try them also at the Runner’s World Festival where I will (hopefully) be running the hat trick (5k and 10k on Saturday, and half on Sunday). I say hopefully because the problems that surfaced with my knee on Sunday (in different shoes I might add) came back when I ran on Tuesday night and I’ve not been running since to give it a chance to get better. I’m also going to get a massage soon as I suspect it may actually be caused by a particularly tight muscle right below the knee. I’m not planning to race any of the distances hard – it will be more of a fast training run, so time isn’t a goal. In fact I’ve decided to increase my workout by cycling the 5 miles to the start from the hotel (and 5 miles back again) each day. I can’t wait.

This is the link to my original review: http://www.blog.runnj.org/2013/04/25/merrell-trail-glove-2-review-and-the-rutgers-unite-half-marathon/

5 Responses to 410 miles on the Merrell Trail Glove 2